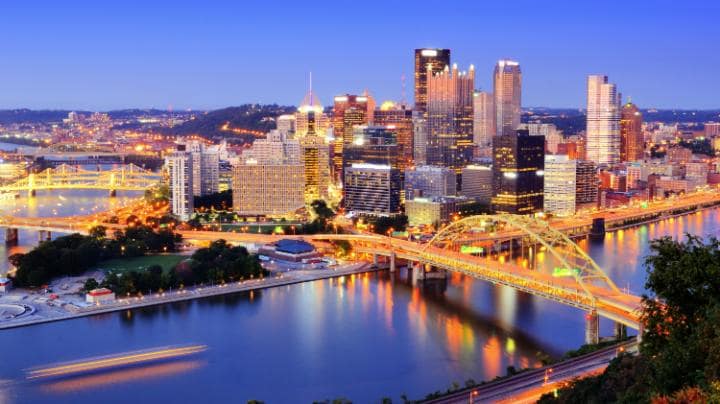 Article from “The Telegraph”

When Pittsburgh was ranked the best US city for foodies by the respected Zagat restaurant guide last year, many were surprised.

Not so in the USA, where the city in the heart of Pennsylvania once known as Steel City has become not just a culinary and micro brewery hub but a centre for the arts as well.

Home to its very own version of New York’s Brooklyn – Lawrenceville – quirky restaurants, galleries in converted warehouses and some stylish hotels are rising from the molten remains of this former industrial city.

A lush and hilly metropolis that sprouts from the junction of the Allegheny and Monongahela rivers, which join to form the Ohio, Pittsburgh is a city of close-knit neighbourhoods tied together by more than 440 bridges.

A lush and hilly metropolis that sprouts from the junction of the Allegheny and Monongahela rivers, which join to form the Ohio, Pittsburgh is a city of close-knit neighbourhoods tied together by more than 440 bridges.

These selections point to the sometimes quirky character of the city. It shows up in interesting places, most notably the Mattress Factory, a contemporary art museum where the interactive exhibits offer strange and wonderful experiences.

Visitors actually enter the room-sized pieces and can walk around and experience them in 3D.

One fascinating example is a new installation called ‘A Second Home’ by Dennis Maher. It looks a bit like someone took a regular house, a log cabin and some Roman columns, jumbled them up and flung them at a wall where they all stuck in odd positions. A flight of stairs starts in mid-air and leads nowhere, marble columns dangle upside-down in what looks like a rustic frame house that is still under construction.

The city’s long-time blockbuster has been the Andy Warhol Museum, dedicated to the Pittsburgh native and leading figure in the pop art movement. It fills seven floors of a converted warehouse and includes thousands of drawings, paintings and sculptures along with source material such as taped interviews that provide wonderful insights into one of America’s most creative minds.

The Carnegie Museum of Art has permanent exhibits from a range of renowned artists, but with the American presidential election closing in quickly, it has also just opened an amazing gallery of photos by Charles (Teenie) Harris. The famed lensman for The Pittsburgh Courier captured candidates and politicians in the city’s more industrialised years.

For a little history alongside your art education, don’t miss the Heinz History Center – the ketchup-maker was founded here in 1869 – Pennsylvania’s largest history museum and an affiliate of the Smithsonian Institution in Washington DC.

All that growth can make a person thirsty and has given rise to a burgeoning café and craft brewery scene. Among the best are the Carson Street Deli and the Grist House Craft Brewery.

Both places are low-key and unpretentious, like just about all of Pittsburgh. At the Carson Street Deli on the South Side, sample the Helltown Purgatory (a West Coast-style IPA) or maybe the Springhouse Big Gruesome (a chocolate peanut butter imperial stout). And don’t ignore the food.

The Donnie Brasco is a strange sandwich that combines buffalo chicken and egg salad. They’re perfect together. At the Grist House Craft Brewery, try the Bee-utiful Blonde, a Belgian ale fermented with honey, or sip Smoke on the River, Polish grätzer to wash down your German sausage.

Although the city’s heritage does not exactly lean toward vegetarians, there are a couple of good options. Head over to the Square Café, where the staff took great care to meet our needs and the menu is full of interesting choices such as butternut squash soup and gluten-free pancakes that were (for once) fluffy and flavourful.

If you’re not looking for a big bite but want to get a flavour of the city’s culinary creativity, one option is to explore some of the niche cafés that seem to be sprouting up everywhere.

Shops such as Espresso a Mano feature a stunning variety of pastries and coffees, all set within decor that has a decidedly industrial feel. But it’s not all art and food. Pittsburgh does green space well too.

A perfect option is the Phipps Conservatory and Botanical Gardens in the Oakland neighbourhood. The gardens were founded by steel and real estate tycoon Henry Phipps as a gift to the city he called home. Wander through the palm trees, the bonsai garden and the butterfly forest.

And don’t miss The Point, the famous park that sits at the confluence of the city’s three rivers. It offers wonderful views anda green retreat in the heart of the downtown area known as the Golden Triangle.

For even better views, hop on one of the two funicular cable cars up to Mt Washington. The ornate wooden cars date back to the 19th century and whisk you up the 367ft-high peak where you can snap photos from the observation decks.

Back at river level, head for a stroll in the Strip District, a former industrial area along the banks of the Allegheny river, which was once a madhouse of piers, shipping and railroads that sent goods throughout the country. Now it is home to nightclubs and bars, as well as some of the city’s most exciting eateries and food carts plus speciality shops selling everything from food to furniture.

Sample a burger from Caribbean-inspired Kaya, stop off for Edgar’s Tacos and don’t forget the drinks – R Wine Cellar serves vintages from around the world – and Wigle Whiskey, which has won a host of national awards for its trademark tipple.

In keeping with the city’s quirky streak, one last stop worth mentioning is Bicycle Heaven, a destination that bills itself as the world’s largest bicycle museum and is a fascinating tour through history. It may even make you want to rent a two-wheeler yourself and explore the ’Burgh by bike. “Yinz gotta go there”. 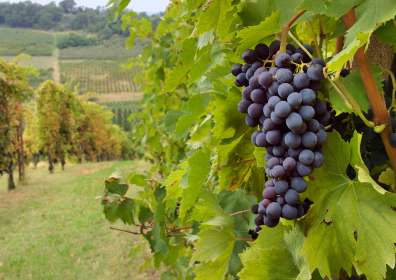 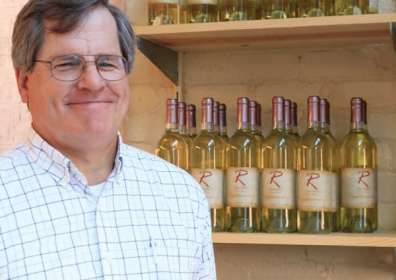 FAMILY WINEMAKERS wanted to be in the middle of things…located in the heart of the Pittsburgh Historic Strip District. 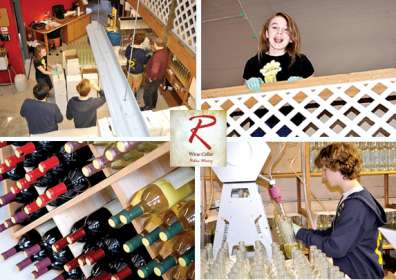